Search for answers to hundreds of internet law questions 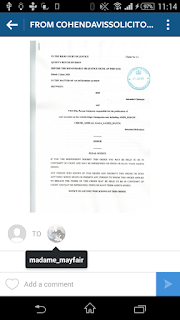 Defamation solicitor Yair Cohen has made a bit of history recently by being the first solicitor to obtain permission from a judge to serve an injunction on an unknown internet troll via Instagram, the popular photo-sharing social media platform. The harassment injunction was granted against the defendant to prevent harassment, defamation and the disclosure of private information, but without knowing the identity or address of the defendant. The student who had instructed Yair Cohen to obtain the injunction was allowed to remain anonymous and has been referred to in the proceedings only as DDF.

The harassment injunction was obtained after unknown Instagram users threatened to publish false allegations against the student and to expose alleged intimate photographs. Yair Cohen, who is a partner at social media law firm Cohen Davis, sought a banning order before Mr Justice Nichols at the High Court of Justice in London. The judge agreed that a permanent injunction was likely to be obtained at trial both under the Protection from Harassment Act 1997 and against the additional release of private information. Even though the defendant was not present at the hearing and was not notified of it, the circumstances were such that it was just, convenient and appropriate that the banning order be granted, having considered the defendant’s human rights against the human rights of the student.

As the messages included allegations of criminal conduct, to preserve the defendant's human rights, the order allowed him (or her) to not be prevented from repeating the allegations but only by attending a police station in person to make a formal complaint about the student. The judge warned though that making false allegations of criminal conduct can amount to a civil as well as to a criminal wrongdoing. Yair Cohen, a defamation solicitor from London who has so far created a number of legal precedents in online defamation law has confirmed that, to his knowledge, this was the first time in a common law country that a court has permitted proceedings to be served via Instagram.

The courts have previously allowed service of injunction notices via social media including Facebook and Twitter but this is the first time a full harassment injunction was served via social media. Serving court documents via Instagram requires specific preparations to ensure readability and the preservation of continuity of evidence. This particular court order specified that the injunction should be served both as text and as an image, which means it required creation of images of particularly high resolution that actually fit into the Instagram template. Discovering the identity of anonymous, online users could take time but in most cases is possible to smoke out harassing online users. Defamation solicitors Cohen Davis have so far brought to justice a number of anonymous online users, who posted defamation and harassment on the internet by bringing civil and criminal legal proceedings against them.


Defamation solicitor hands online offender Paul Britton to the police and then sues for defamation!
Posted by The Internet Law Centre at 09:40